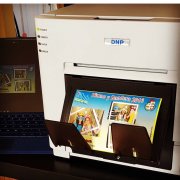 The new DNP RX-1 HS is now in full swing, so here are just a few fact we would like to share with you.